In the first chapter meditation was explained as bringing one to the middle (medi),
the center point of a cross,

to see all perspectives

So what are the horizontal and vertical directions?

2a.) The principle of up and down movements

In the Emerald Tablets, Hermes Trismegistus,
(a combination of the Greek god Hermes and the ancient Egyptian god Thoth), said:

That which is below is like that which is above & that which is above is like that which is below to do the miracles of one only thing
And as all things have been & arose from one by the mediation of one: so all things have their birth from this one thing by adaptation.
The Sun is its father, the moon its mother, the wind hath carried it in its belly, the earth is its nurse.
The father of all perfection in the whole world is here.
Its force or power is entire if it be converted into earth.
Separate thou the earth from the fire, the subtle from the gross sweetly with great industry.
It ascends from the earth to the heaven & again it descends to the earth & receives the force of things superior & inferior.
By this means you shall have the glory of the whole world
& thereby all obscurity shall fly from you.
Its force is above all force. For it vanquishes every subtle thing & penetrates every solid thing.

Those are wisdoms which often are used in alchemy  or occultism (which is nothing dark as such, but simply means “hidden”). Alchemy is more about inner transformations than outer ones, so this cryptic text also describes the workings of “qi” (the body life-force in Chinese Medicine) or “prana” (the breath-life force in Indian Ayurveda).

The energy is internally purified by “separating the subtle from the gross“. This is exactly what the intestines do – to separate the useful food from the useless stools.

The ability to separate valuable thoughts from non-applicable information without even being able to explain it intellectually is called intuition (meaning the ability to give tuition to oneself). This ability is called Viveka in Indian terms – the ability to discriminate – a term which in the West unfortunately has mostly a negative connotation.
And because this ability resides in the intestines, it is called the “gut-feeling”.

The reasons why women are born with a better access to their intuition is because the heart, where thoughts reside is a bag full of blood,
and the only part below the diaphragm
(the surface of the water above which the intellect and below which the intuition can be found),
which also is a bag full of blood, is the uterus.
Hence in old days when hysterectomy was performed, side effects could have been for a woman to become hysterically.
In later years the access depends on how much the intuition was shined upon or dismissed by rational dismissal. Hence the gender gap becomes more irrelevant later.

This is why in Sodarshan Chakra Kriya one has to hold the breath (and therewith thoughts) and then pump the belly whilst gearing to the higher self by silently chanting the mantra “god” (Wahe Guru). Since thinking seems to manifest to me similar to hearing, I “hear” a thought mantra. Once in 24 years only I was blissed to hear that mantra not within my brain but from the belly.

Whenever you see a lateral relationship, there is usually a concern about the right interaction with the world (in opposite to the vertical concern about the higher self).
This usually results in strong ethics, as it is promoted in one of the oldest religions, called  Zoroastrianism, as can be seen by the wings on its main symbol, the Farahavar:

Those wings are likely better known from ancient Egypt, and knowledge from it is in occult work, Rosicrucianism or Magic mixed together with the ancient Kabbalah, as one can see in the picture below.

In the Jewish Kabbalah there are vertically 3 pillars: Left judgement, right mercy, and in the middle the neutral clarity, which is the highest spiritual goal in order to see the world for what it truly is. 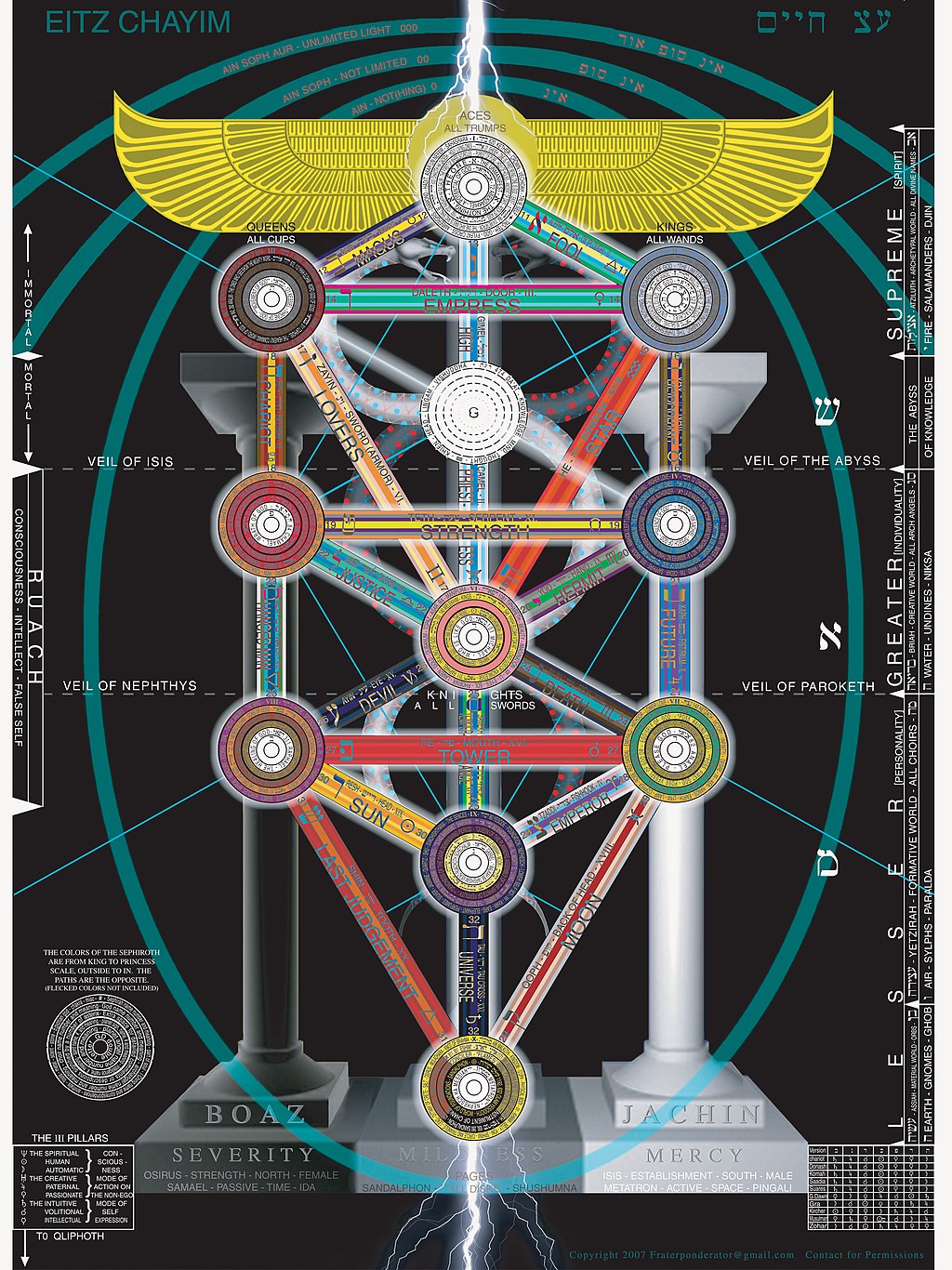 Surprisingly, severity is the female side and mercy the male aspect. This can be better understood if one contemplates upon the yin and yang qualities, because yin is descending and “knocking down” and yang ascending and merciful uplifting.
So those principles should preferably be detatched from genders.

At this site, Chhinnamasta, the goddess which conveys spiritual self-realization and the awakening of the kundalini – spiritual energy  is described through the Nadis (Indian medicinal channels):

The three streams of blood can be understood by the Nadi system in our body. These three streams are Naadis: lateral ones are the Ida and Pinglaa (left and right) Naadis; the central one is the Susumnaa Naadi. Head is the cortex and brain, the seat of desires. Susumnaa Naadi rises through the brain which receives nourishment from central stream of blood. Spirit (Kundalini goddess) rises to the top of the head through the roof of the mouth; severed head represents severed mind- Amanska, a state of paucity of mental functions conducive to higher states of consciousness, whose destination is Parasiva (absolute reality). The Naadis break through the grantha(knot) in the Chakras and lift off the head, the seat of human consciousness. Chhinmastaa represents Susumnaa Nadi, Varnini, the Pingalaa Naadi, and Daakini, the Ida Naadi.

Similarly in Chinese Medicine there are left-right-relationships which are seen in the pulse diagnosis where the left side reflects the blood whilst the right side the (ener)qi.
(Interestingly the blood side is the cooling side, because the Qi is warming).

In an alchemistical text ascribed to Marsilio Ficino three suns are described: black, white, and red, corresponding to the three most used alchemical color stages;

Also in the Bhagavad Gita chapter 14 tose three aspects are seen as Gunas:
The dull (black) aspect is called Tamas (ignorance), the heated (red) one Rajas (passion) and he pure one Sattva (purity) are summed up as follows:

“Purity, Passion and Ignorance are the Qualities which the Law of nature bringeth forth.
[…]
Purity, being luminous, strong and invulnerable, binds one by its yearning for happiness and illumination.
Passion, engendered by thirst for pleasure and attachment, binds the soul through its fondness for activity.
But Ignorance, the product of darkness, stupefies the senses in all embodied beings, binding them by chains of folly, indolence and lethargy.

When the light of knowledge gleams forth from all the gates of the body, then be sure that Purity prevails.
[…]
the impulse to act and the beginning of action itself are all due to the dominance of Passion.
Darkness, stagnation, folly and infatuation are the result of the dominance of Ignorance
[…]
When Purity prevails, the soul on quitting the body passes on to the pure regions where live those who know the Highest.
When Passion prevails, the soul is reborn among those who love activity;
when Ignorance rules, it enters the wombs of the ignorant.

They say the fruit of a meritorious action is spotless and full of purity;
the outcome of Passion is misery,
and of Ignorance darkness.

When Purity is in the ascendant, the man evolves;
when Passion, he neither evolves nor degenerates;
when Ignorance, he is lost.
[…]
By what signs can he who has transcended the Qualities be recognized?
[…]
He who shuns not the Quality which is present, and longs not for that which is absent; He who maintains an attitude of indifference, who is not disturbed by the Qualities, who realises that it is only they who act, and remains calm; Who accepts pain and pleasure as it comes, is centred in his Self, to whom a piece of clay or stone or gold are the same, who neither likes nor dislikes, who is steadfast, indifferent alike to praise or censure; Who looks equally upon honour and dishonour, loves friends and foes alike, abandons all initiative, such is he who transcends the Qualities. And he who serves Me and only Me, with unfaltering devotion, shall overcome the Qualities, and become One with the Eternal. For I am the Home of the Spirit, the continual Source of immortality, of eternal Righteousness and of infinite Joy.”

Those 3 aspects and colors black, white, red are found in the last century German- (and later also Nazi-) flag, the brothers Grimm fairy tale of Snow White when a queen sits sewing at an open window during a winter snowfall when she pricks her finger with her needle, causing three drops of red blood to drip onto the freshly fallen white snow on the black windowsill. Then, she says to herself, “How I wish that I had a daughter that had skin as white as snow, lips as red as blood, and hair as black as ebony.”
So you see that the rajas dogma “one has to”, just as the tamas rule “one may not”, are build deep into the German nation.

The concept of the dualistic enslaved satan for example is depicted in red and black colours whilst the angelic wise god-principle is portrayed in white. (“weiss”= white in German, “weis” relates to wise or knowing) Hence we probably have old tales about “fair” women which later was misunderstood for white skinned people being superior.

The satanic principle, which by superstitious people taken as a literal person, is rather a depiction of the tragic turmoil between the choleric-fiery red and dumb-lazy black side, just as the consumption of fiery drugs, such as cocaine or hard alcohol do, which initially give you a feeling of strength through assertiveness, but later have to be payed for with bad and sometimes long lasting physical or emotional hangovers.
The center path of neutral and divine wisdom is depicted as white – the color of the divine or saints for example. 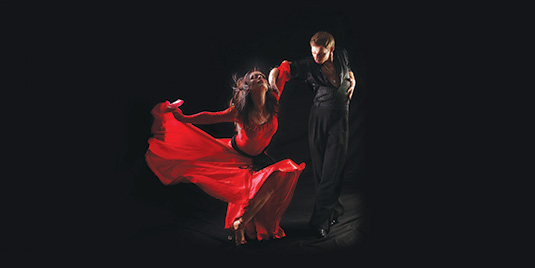 And here is a brilliant article about the same aspect in Kashmir Shaivism: the 3 godesses: Para, Apara and Parapara.

There are two ways to reach that neutral wisdom:
Either by total dedication towards the divine,
or by ways to energetically rebalance oneself,
which I will write about in the next articles.

7 Replies to “Keys to understanding the universe #2 : left, up, down, right”